A Logic gate performs a logical operation on one or more logic inputs and produces a single logic output. In this article, I explain What is logic Gates in Computer, and the type of logic gates with an Example.

What is logic Gates in Computer?

A Logic gate performs a logical operation on one or more logic inputs and produces a single logic output. However, In this logic normally use is Boolean logic, and that is most commonly found in digital circuits. So Logic gates are primarily implemented electronically using diodes or transistors. But can also be constructed using electromagnetic relays, fluidic logic, pneumatic logic, optics, molecules, or even mechanical elements.

Digital Logic Gates, which are also known as combinational logic gates or simply ‘logic gates’, are digital IC’s, whose output at any time is determined by the states of its input at that time. Since logic gates are digital IC’s their input and output signals can only be in one of two possible digital states, logic’0′ or logic’1′. Thus the logic state in which the output of a logic gate will be put in depends on the logic states of each of its individual inputs.

The primary application of logic gates is to implement ‘logic’ in the flow of digital signals in a digital circuit. Logic in its ordinary sense is defined as a branch of philosophy that deals with what is true and false. Based on what other things are true and false. This essentially is the function of logic gates in digital circuits-to determine which output will be true or false, given a set that can either be true (logic ‘1’) or false(logic ‘0’).

Interestingly, the operation of logic gates in relation to one another may be represented and analyzed. This is using a branch of mathematics called Boolean Algebra. So which is like common algebra deals with the manipulation of expressions to solve or simplify equations. Expressions used in Boolean Algebra.

Digital systems are said to be constructed by using logic gates. These gates are the AND, OR, NOT, NAND, NOR, EXOR, and EXNOR gates.

Read Also: What are DNS and IP?

Type of logic Gates in computer with the aid of Truth Tables :

The AND gate is an electronic circuit that gives a high output(1) only if all its inputs are high. A dot (.) is used to show the AND operation i.e A.B. Bear in mind that this dot is sometimes omitted i.e. AB. 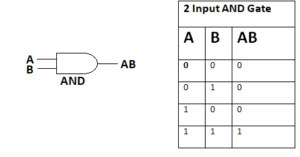 The OR gate is an electronic circuit that gives a high (1) if one or more of its input is high. A plus (+) is used to show the OR operation.

The NOT Gate is an electronic circuit that produces an inverted version of the input at its output. It is also known as an inverter. If the input Variable is A, the inverted output is known as NOTA.  This is also shown as A, or A with a bar over the top, as shown at the outputs. The diagrams below show two ways that the NAND logic gate can be configured to produce a NOT gate. It can also be done using NOR logic gates in the same way.

Read Also: What Is Algorithm

This is a NOT-AND gate which is equal to an AND gate followed by a NOT Gate. The output of all NAND gates is high if any of the inputs are low. The Symbol is an AND gate with a small circle on the output. The small circle represents inversion. 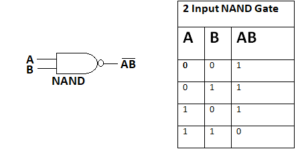 This is a NOT-OR gate which is equal to an OR gate followed by a NOT gate. The outputs of all NOR gates are low if any of the inputs are high. The Symbol is an OR gate with a small circle on the output. The small circle represents inversion.

Read Also: What is Nibble, Bit, Byte in Computer

The ‘Exclusive-OR’ gate is a circuit that will give a high output if either, but not both, of its two inputs, are high. An encircled plus sign (⊕) is used to show the EOR operation.

The ‘Exclusive-NOR’ gate circuit does the opposite to the EOR gate. It will give a low output if either, but not both, of its two inputs, are high. The symbol is an EXOR gate with a small circle on the output. The small circle represents inversion.

However, The NAND and NOR gates are called the Universal function since with one the AND and OR functions and NOT can be Generated.

5 Best Operating systems for Computers and laptops in 2022