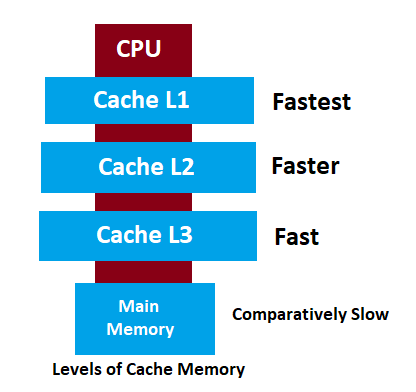 Cache Memory use to improve your experience in computers and Phones. Cache memory faster than ram and SSD, HDD. In this article, I Explain What is Cache Memory in computers, Mobile Phones, Cache Latency, and Type of Cache Memory, etc.

What is Cache Memory in Computer?

Cache Memory is Faster than Ram, ROM but Cache memory size is limited. It is the fastest memory that provides high-speed data access to a computer microprocessor. Cache Memory holds mostly requested or used Information and instructions because When the user needs to use that, it will Immediately Available.

Cache Memory makes copies of the data from frequently used main memory locations. The Cache memory works according to various algorithms, which decide what information it has to store. These algorithms work on the possibility of deciding which data will be most needed.

For example, You read a book on your desk Everyday, Here your books are a program file. you need to highlight some points in your book, which means you need to customize your file. So you need a highlighter, And Highlighter has in your desk drawer, Here the drawer is your cache Memory. Where holds mostly requested or used Information and instructions When the user needs to use that, it will Immediately Available. 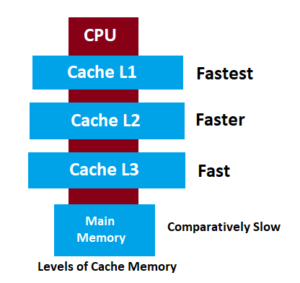 L1 is a primary cache memory. This type of cache memory is included in the processer. The size of the Lavel1 cache is very small compared to other cache memory. However, L1memory ranges between 2KB to 64KB, it depending on the computer processor. Instructions required by the CPU are first discovered in the L1 Cache.

L2 used as secondary Cache memory. In some processors, L2 may be out of CPU, it’s connected with the high-speed bus. The size of the L2 cache is more capacious than L1 which is between 256KB to 512KB. After searching the instructions in L1 Cache, if it is not found, then the computer microprocessor is searched in the L2 cache Memory.

The L3 cache is large in size. L3 Memory lives outside of the processor. but it’s connected with the high-speed bus. L3 is slower in speed than L1 and L2. Its size is between 1MB to 8MB. In multi-core processors, each core can have L1 and L2, but all cores share a common L3 cache.

Read More: What Is Algorithm in Computer

What is Cache Latency?

Cache Latency is part of the process of your data. Sometimes when the computer sends a request for some unstored cache files. That time process is a delay for some time, This delay called Cache Latency.

What is Cache Memory For Mobile Phones?

In the Mobile Phone Cache Memory, Apps sorted some temporary files. the Apps more you use, these apps store your temporary data. for when you use it next time, it will start quickly and enhance your experience. However, you can clear cache memory on the mobile phone, to increase your storage.

Best Free Antivirus for Pc and Laptop in 2022