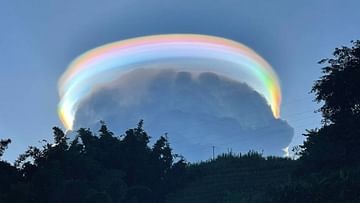 Pileus Cloud: A pilus, also known as a cap cloud or scarf cloud, is actually a layer of smooth clouds that forms just above the cumulus or cumulonimbus cloud. In this article, we will know about pink-sky-orange strange cloud like a rainbow nestles above dark clouds.

Have you ever seen a pink-sky-orange strange cloud like a rainbow nestles above dark clouds?

Beijing: The game of clouds is often seen in the sky. Sometimes the shape of a horse, sometimes the shape of a bird. But not only the shape, but also the color of the cloud changes. Have you ever seen clouds of many colors at once? This strange phenomenon has been seen in the Guangdong province of China. Clouds of different colors have been seen there. Although at first glance it looks like a rainbow, it is actually a cloud. This pink, blue ray was visible above a cotton Peja cloud.

It is reported that this rainbow-like cloud was seen in late August in the Puning city of Guangdong province of South China. Residents took pictures of the cumulus cloud and posted them on social media. The picture of that cloud went viral overnight. The cloud image has been viewed by over 13 million people and has more than 5 lakh likes so far.

A pileus also called a cap cloud or scarf cloud is actually a layer of smooth clouds that forms just above a cumulus or cumulonimbus cloud.

How do these bright cloud clusters form?

Scientists have said that these clouds are mainly formed from small particles of ice or water droplets present in the atmosphere. As large chunks of ice form a lunar or solar halo, as rays of light fall on small particles of ice or droplets of water, clouds of varying colors are formed. Just as a crystal emits different colors when light falls on it, similarly colored light rays are scattered when light falls on this ice particle or water drop. A rainbow-like cloud is formed when a cloud of one color is placed on top of a cloud of another color.

But this cloud does not last long, the big cloud which is under the pilus cloud gradually rises up and merges into the colored cloud. Au clouds form at low altitudes from the surface. These types of clouds are formed if the humidity in the air is high or the cold air reaches the freezing point. These clouds are very thin and are made up of tiny particles of ice.

I hope you get the all information about Have you ever seen a pink-sky-orange strange cloud like a rainbow nestles above dark clouds? If you like this article, you can share and comment. So that we too have a chance to learn something from your ideas and improve something.

iPhone 14 and iPhone 14 Plus Features and Specifications Not as Expensive as You Think!