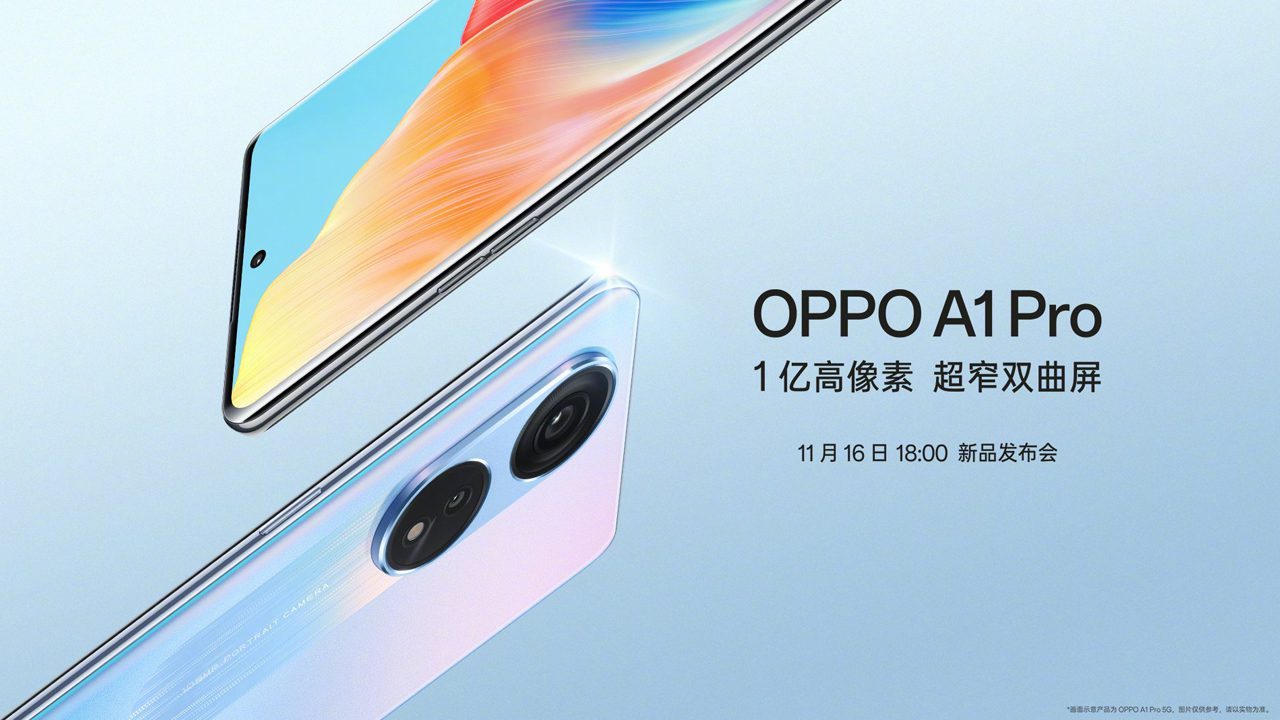 Oppo launched the Oppo A58 5G handset under its A-series on November 8 and recently the device went on sale in its home market China. And now, the brand is all set to launch its most advanced A-series phone, the A1 Pro 5G. The company has also announced the launch date of this upcoming smartphone on its social media platform. The A1 Pro 5G has been confirmed to hit the market this week. Let’s take a look at everything we know about this new Oppo handset so far.

Oppo A1 Pro 5G is coming in the market this month

Posting on its official Weibo (Chinese microblogging site) handle, Oppo has confirmed that the Oppo A1 Pro will be launched in the Chinese market on November 16 at 6PM (local time). The design of the handset has also been shown in the poster published on Weibo. According to the poster, Oppo A1 Pro will have a curved edge display on the front. The rear panel of the device will house an oval camera module with two camera rings. The 108-megapixel primary camera will be located in the upper camera ring. It will also have a secondary camera and an LED flash.

Earlier this month, an Oppo phone with model number PHQ110 received China Essentials certification (3C) and approval from important Chinese certification sites like TENAA. The same device has also been spotted in the database of benchmarking site Geekbench. The PHQ110 model number is associated with the Oppo A1 Pro. However, initial reports suggest that the device is likely to be called Oppo A98.

The Oppo A1 Pro will feature a 6.7-inch AMOLED display that offers full-HD+ resolution, 10-bit color, and an in-screen fingerprint scanner. It is believed that it is similar to the display used in the Oppo Reno 9 series handset. The device will be powered by the Snapdragon 695 chipset. It is expected to come with up to 12GB of LPDDR4X RAM and up to 256GB of UFS 3.1 storage. It will also have a microSD card slot for more storage.

For photography, the Oppo A1 Pro is said to sport a dual-camera setup with a 108-megapixel primary sensor and a 2-megapixel sensor on the rear panel. At the same time, it will have a 16-megapixel front camera for selfie. For power backup, this Oppo device will come with a 5,000mAh battery, which can support 67W fast charging.

Honda Activa 6G can be brought home for just Rs 8,000, this scheme will drive you to the showroom

To protect all four Realme phones from virus-malware this month’s security update, you got it