Black softshell turtle: Mohan—nickname for a species of turtle. ‘Black Soft Sail Turtle’ in English. The four round spots on the back and the long nose differentiate this turtle from other turtles. The story of these unique turtles is similar to that of the Phoenix. Listen to that story.

Mohan — Nickname of a species of tortoise. In English ‘Black Softshell Turtle’ (Black Softshell Turtle). The four round spots on the back and the long nose differentiate this turtle from other turtles. The story of these unique turtles is similar to that of the Phoenix. Listen to that story. In 2002, the International Union for Conservation of Nature (IUCN) declared the black soft-shell turtle as ‘extinct’. ‘Black soft sea turtle’ disappeared from nature Naturalist says, “If we look at the world’s living world in the form of a sheet, then every animal and plant is a thread of that sheet. If a species—be it an animal or a plant—walks the path of extinction, a permanent hole is created in the sheet of nature. There is no way to bring back that lost species.” Such was the case with the ‘Mohan’ or the ‘Black Soft Sail Turtle’. They left the world forever.

But nature often plays tricks that fool even our common sense and wisdom. Following the IUCN announcement in 2002, in 2004, environmental activists found 408 ‘Mazari’ turtles in a pond near the Bayezid Bostami Shrine in Chattogram, Bangladesh. These turtles were known by the local people as Mazari because they lived in the ponds of Mazari. It is said that in 1800, Hazrat Baijid Bostami had brought the ancestors of this turtle from Iran to Chittagong. Because the name of the religious leader is included, this turtle was also important in the general public of Bangladesh. In Chittagong, the tortoises were reared under the supervision of the pilgrimage authorities. In 2007, 90 ‘mazari’ tortoise hatchlings were born. 74 in 2008, 96 in 2009, 28 in 2010, 45 in 2012 and 40 in 2014. Environmentalists suspect that the turtles in the pond adjacent to Chittagong’s Baijid Bostami temple are ‘black softshell turtles’. In this direction, in 2017, only one black soft cell turtle was found in wild condition in Old Okuk village of Okha district of Nagaland. Environmental scientists collected a DNA sample of the turtle and sent it to the Bayjid Bostami Temple in Chittagong. The suspicions of environmentalists and scientists have been proved correct, the DNA of ‘Mazari’ turtles in the Dargah pond has an exact match with the DNA of the Nagaland turtle. There is no doubt that the ‘Majri’ tortoise is actually a black colored soft-shelled tortoise.

Environmental scientists are shaken. More information comes from Assam. Conservationists have found a small number of black soft cell turtles in the wild in Kaziranga National Park, two small areas in the Giavarali River and the Brahmaputra River basin. Under the protection of these turtles, an incident was happening quietly in Upper Bengal and also in Upper Bengal. Which is somewhat rare from the point of view of wildlife conservation. May be called ‘Dharmic Protection’ (Religious Protection). A rare tortoise lived on two sides of barbed wire under the auspices of two religions Islam and Hinduism. 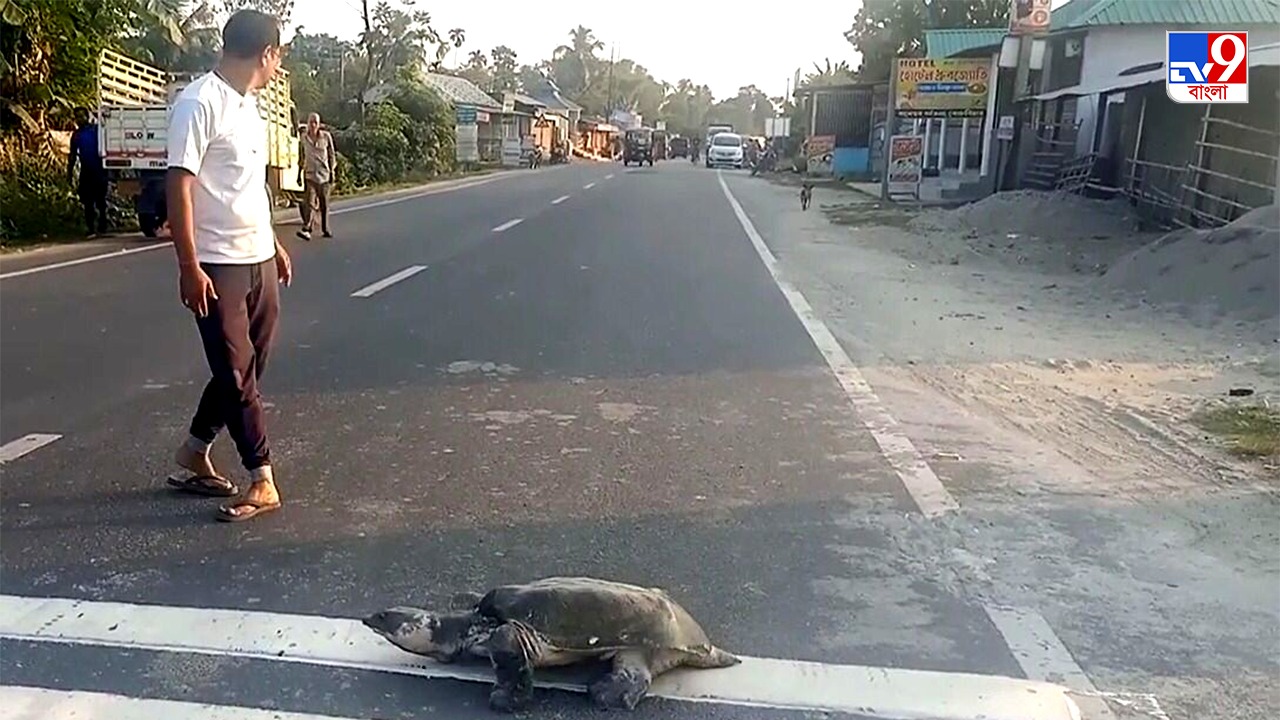 Mohan is crossing the road, the environmentalist is helping.

There are Black Soft Sail Turtles in the pond of Hayagriba Madhav Temple in Assam, Kalyan Sagar Pond near Sundari Temple in Tripura and Shivdighi near Baneshwar Temple in West Bengal. Those turtles of Shivdighi are lovingly called ‘Mohan’ by the local people. Kurma is the second incarnation of Lord Vishnu in Hinduism. Another name of Vishnu is ‘Mohan’. So he has so many names? Because of the religious beliefs involved, the turtles were kept undisturbed in the ponds. Actually, because of humans, they are on the path of extinction. And because of people they come back again.

In the words of Kazi Nazrul Islam: “Kavu, nothing is lost in Your universe. We are senseless, in blind delusion, so call upon the Lord. Like You, Your world is always complete, O Narayan! The blind eye does not see Can, therefore it is the god of sorrow.”

The Black Soft Sail Tortoise has long been one of the attractions of Shivdighi in Coochbehar and the reason for the fame of the Baneshwar Temple. The pond has been declared a ‘heritage site’ by the State Biodiversity Board of West Bengal. However, the temple authorities were not following any scientific method to measure the quality of the pond water and the amount of oxygen in the water. Allegedly rare, ‘critically endangered species’ (critically endangered species) in the new IUCN conservation criteria were dying due to being locked in the concrete of the pond. In the last week of October 2022, three ‘Mohan’ turtles were seen swimming unusually in the pond of Baneshwar temple in Coochbehar. Members of environmental organization ‘Earth’ and ‘Bane’ rescued the three turtles and handed them over to the forest department. The sick Mohan, an endangered species, needed treatment. Two charms respond to treatment. One ‘Mohan’ dies.

Mohans are abundant in that region of Coochbehar. Apart from Shivdighi, there are many black softshell turtles in nearby Sagardighi. While Shivadighi was somewhat safe, Mohan Chudi was walking in the darkness of the night. This rare black softshell turtle was being smuggled in sealed bags every night for 15-20 hours. 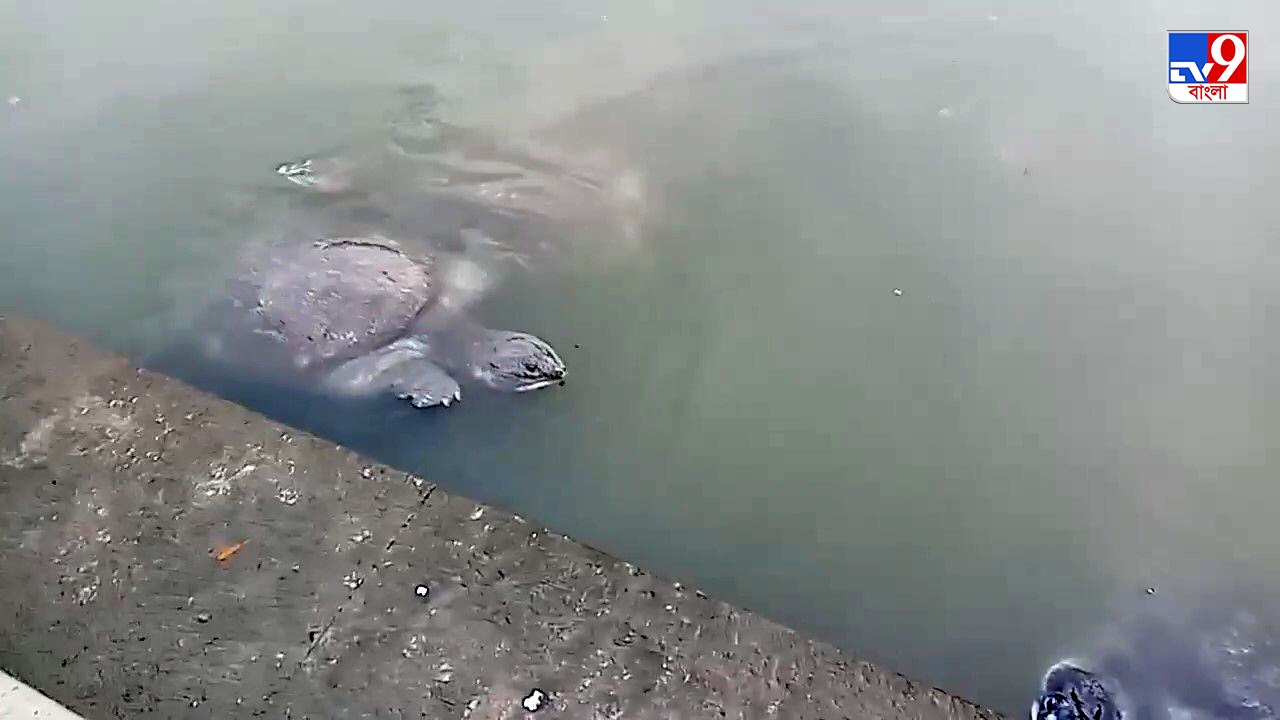 In Shivdighi of Baneshwar temple.

Apart from smuggling and unhygienic environment, road accidents are another major reason for the decline in the number of black softshell turtles in Cooch Behar. On October 22, 16 ‘Mohan’ were killed in a road accident. Black softshell turtles are active at night. They move slowly when crossing the road and are often imperceptible to drivers due to their dark skin. Secondly, there is no night light on the roads in that area. There was no road sign on it. In this situation, local wildlife organizations have become active. Members of Cooch Behar’s ‘Mohan Raksha Samiti’ and affiliated wildlife organizations are on the road adjacent to the Baneshwar temple. A road has been blocked to raise awareness about the death of ‘Mohan’ in road accidents. Members of the ‘Mohan Raksha Samiti’ peacefully holding candles highlighted the importance of a rare species of turtle like Mohan among motorists and passers-by. He also called upon the people in the local markets and temple areas to unite against Mohan Pachar.

To save Mohan, Chhata Puja has been stopped in Shivdighi this year. Parimal Burman, chairman of the Mohan Raksha Samiti, told TV9 Bangla, “The ‘Mohan’ temple trust is struggling due to lack of coordination between the forest department and the local administration. Black softshell turtles are being conserved under government supervision in Bangladesh and the neighboring state of Assam. But there is no such government scheme or initiative in this state.” So Parimalbabu also wrote letters to Chief Minister Mamata Banerjee and Prime Minister Narendra Modi. Black softshell turtle or ‘Mohan’, a very rare species, is seeking protection as per the plan.

These two popular phones of OnePlus got Android 13 update, will get this feature